I've been happily using Dell Inspiron 1420, and it still is a fine laptop to run Linux on, but it started to feel a bit stale, especially with its 1280x800 display. So I got a Vizio CT15-A5. 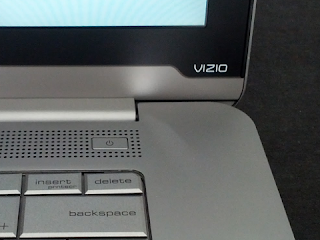 Its 1920x1080 display was the primary reason I picked this over Lenovo X1 carbon, even though this is also quite larger; in fact, I do not think I would be willing to carry anything larger than this one.

Doesn't the manufacturer's logo look like U1210, as if it is screaming to get Ubuntu 12.10 installed?

Now, even though I am sufficiently old that tweaking machine configuration no longer excites me too much, I am still curious. It came with Windows 8 (without reinstallation medium). So instead of wiping and installing Ubuntu from scratch, I decided to keep the Windows for a while and see how it looks like, and dual-boot the machine.

Of course, before deciding that, I had to make sure that it worked with Ubuntu (which happened to be the distro I have been running on my 1420). Booting from USB key needed a bit of BIOS tweaking (and it came with no manual, so it needed a bit of Googling around to find out that hitting F2 was the way to fall into the bios settings screen while booting).

There are three places in the bios setting that affects the booting:
After a couple of trial and error sessions, I found out that in order to boot from the USB key, I had to (1) turn off Secure Boot, (2) pick "Other" from OS Support, and (3) have "USB key" early in the boot device order. In fact, it did not allow me to do (2) until I turned off Secure Boot.

It felt funny to boot the "try it out" mode from a USB key, install Chrome browser in that environment, adding a plugin to do video hangout for G+ in it, all without actually touching the internal disk at all. All the usual suspects in Linux portability (touchpad, wifi, webcam, speakers, microphone, etc.) seemed to work fine out of the box.

Booting into the Windows and looking at its disk (Win-R "diskmgmt.msc") reveals that it uses GPT partitioning scheme, with bunch of garbage partitions (300MB Recovery and 260MB ESP at the beginning, 6.8G Recovery and 2G OEM at the end, with all the remaining space allocated for Windows C:). It also seems that booting from the USB key puts it into BIOS (i.e. not UEFI) mode, so it is understandable that Ubuntu installation USB key said that it does not see any bootable operating system on the disk, and there needs a dedicated "bios_grub" partition.

As a smaller configuration of the same ultrabook ships with 128G SDD (I got a 256G version), it should be sufficient to give Windows (and all the other garbage partition) 128G or so. I shrunk C: to 64G, carved out 22G for Linux (root filesystem), 4G swap, and created a 140G "Data" partition to be shared between the dual booted OSes. Also I gave a few megabytes to the bios grub partition.

The configuration ended up a bit strange albeit a workable one. When the firmware is set to boot from the internal HDD, because Ubuntu installation wrote the early stage of grub into the MBR (without corrupting GPT), it boots into Ubuntu. When set to boot with UEFI, it boots into Windows. I am guessing that I could install rEFInd and always boot with UEFI to dual boot from there, but I haven't felt the need for that step yet.

For now, I still have the Windows installation. I can run Putty to ssh into my primary machine, I can run Gimp, LibreOffice and GnuCash locally. I haven't found something I have to boot into Ubuntu side of the system to do, so I might end up keeping the Windows side much longer than I was originally planning to.  Besides, I'm tentatively enrolled in Amazon's Prime program, and their Prime instant video does not play on Chrome/Linux, so...

I'm curious what filesystem you're using for your "data" partition. NTFS? I'll also point out that Prime Instant Video works fine in Firefox/Linux, and just uses Adobe Flash, so unless there is something weird about that plugin and Chrome I'd expect it to also work. There is some odd thing where you have to install "hal" for DRM'd videos to work in Adobe Flash, however: http://askubuntu.com/questions/145735/adobe-flash-player-not-working-with-amazon-prime

Why don't you just install pure Linux and then use VirtualBox to install Windows?

Yes, D: (data) is formatted in ntfs, not because I had any particular technical reason, but that was how Windows side did it.

I knew about Chrome/Linux being blocked due to sandboxed adobe flash player, but didn't know about Firefox/Linux. I guess you learn new things every day.

In order to "install Windows" in a virtual environment, wouldn't I need some installation medium? I am using what came preinstalled with the machine (without reinstallation medium), and am not interested in paying Microsoft tax twice.

same model just went on sale for $799 and free shipping. Was trying to see if anyone setup Linux on it and you were only real article i found :). So are you running Linux full time on this thing?

I managed to dual boot install the machine with each OS secure booting. My post shows how to secure boot with a live USB key http://blog.ryantm.com/post/36824493708/vizio-c15-a5-secure-boot-ubuntu-12-10-live-usb

Hmph. I have no idea what this "Change UEFI BBS Priorities to be the USB key" step is X-<.

I do not think I saw anything in the firmware UI to futz with it...

@Gitster It is the menu at the bottom of the Boot Tab in the EFI settings: "UEFI Boot Drive BBS Priorities"

Thanks a lot for your instruction. It works like a charm.
"After a couple of trial and error sessions, I found out that in order to boot from the USB key, I had to (1) turn off Secure Boot, (2) pick "Other" from OS Support, and (3) have "USB key" early in the boot device order. In fact, it did not allow me to do (2) until I turned off Secure Boot."