The Vertical Farm: Feeding the World in the 21st Century, by Dickson Despommier 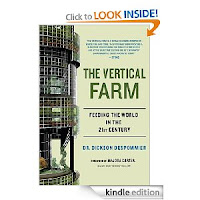 This book was given to me by a happy Git user (Thanks, Michael!) as a gift, picked from my wish list at Amazon.


The book was fascinating and somewhat disappointing at the same time. Perhaps disappointing is not a good word, and I should say somewhat frustrating.

I found that the first half of the main argument of the book very convincing: conventional soil-based agriculture that relies heavily on agro-chemicals (herbicide, insecticide and fertilizer) and causes terrible damage to the environment due to run-off water, is not simply sustainable. The other half of the premise, however, looked rather sketchy, day-dreaming and hand-wavey: multi-story high-tech greenhouses can be built inside city boundaries, and using the state of the art scientific method (e.g. supplying the plants with purified water spiked with necessary nutrients and growing them aeroponically; lighting with OLED that emits only the wavelengths absorbed by chlorophyll; burning plant waste with plasma-arc gassification) sufficient amount of high-quality food can be produced, freeing vast farmland that we have been wasting back to the nature, while reclaiming as much water and energy as possible.


I am reasonably sure that the author has some solid numbers to convince policy people about the benefit and feasibility of his dream, but I found them solely lacking in the book. Here is only one passage with some numbers I remember:


One strawberry farmer who wishes to remain anonymous decided to replace his now destroyed 30 acre farm by constructing a high-tech greenhouse with a 1 acre footprint. Using hydrostackers, he was able to produce the equivalent of 29 acres’ worth of fruit, with year-round production. He elected to return the rest of his farm to its natural setting by simply leaving it alone. Within two years, the understory had returned and the biodiversity of the land improved dramatically.

That is a nice story, but isn't strawberry rather special? It is sufficiently high-value kind of produce that would pay for a farmer to invest in high-tech. If the book had some back-of-the-envelope attempt at some math, like, "To supply a small city of 20,000 people, we would need X tons of grains, Y tons of cabbage, Z tons of ..., and it would need to treat W gallons of black water a year. A vertical farm consisting of N buildings (M stories high) of L sqft footprint would be sufficient for all of the above. The net intake of water and energy, offsetting with the water and energy reclaimed, would be such and such", even if the numbers were qualified with "this is just a back-of-the envelope with my own optimistic assumption that in 5 years technology will sufficiently advance to solve this and that problems", it would have been able to convert me, a mere interested reader, into a believer, somebody who shares the dream.

In the chapter on funding, after discussing that not everything is money and governments will be the likely sources of sponsorship, Dickson alludes to commercial sponsorship possibilities, and there I found this passage:


Google would be my first choice. This giant has an altruistic streak a mile wide. Google could afford to promote the concept with significant financial aid.

This is what made me the most frustrated about the book, because that was exactly what I was feeling while reading earlier parts of the book. Google is a green company; it for example uses many solar photo-voltaic panels (1.6MW), supplying about 30% peak electricity in the four main buildings. Significant number of employees take company shuttles, instead of driving their own cars to work.


If I were to bump into Larry or Sergey at the campus tomorrow and have a chance to chat with them (not likely to happen, as my workplace is on the other side of the campus that is a mile wide), I would love to suggest them that we build an experimental vertical farm near the Mountain View campus, supplying all 20+ cafes and micro-kitchens. Even though the book managed to convert me enough to be very much attracted to the idea, it didn't give me enough to come up with an intelligently-sounding answer to a very basic question, such as "OK, we will go ahead with Dickson's idea—how much space and how much workers do you want?"


Nevertheless, the author's enthusiasm jumps at you from every page, while deep knowledge and experience in his professional area (the author is a microbiologist, ecologist and Professor of Public Health in Environmental Health Sciences at Columbia University) showing through between lines. It was a very pleasant read, and I would highly recommend it to anybody.
Posted by _ at 12:31 AM

Email ThisBlogThis!Share to TwitterShare to FacebookShare to Pinterest
Labels: Thanks, UnGit